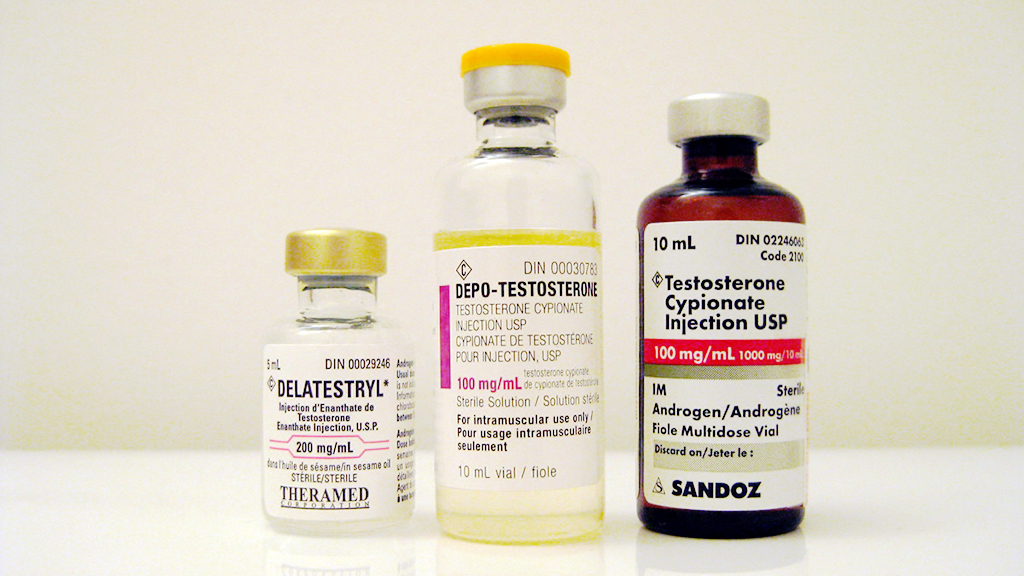 Testosterone is a universal steroid. Preparations based on this substance are present on the market in the form of esters with different half-lives, as well as their mixes. Athletes of different levels of training can buy these anabolics.

Since Testosterone is the basis of these drugs, they have common features. Athletes should be aware not only of the differences between these AAS, but also the properties that unite them. All testosterone-containing anabolics have high anabolic and androgenic activity. These figures are 100 percent.

There are also some more general characteristics in the steroid profile of these drugs:

Also, these anabolics produce similar effects on the body:

In addition, Enanthate, Cypionate and Sustanon have similar negative effects. It is generally accepted that Testosterone is a fairly safe steroid. This is so, but the possibility of side effects cannot be ruled out. All AAS interfere with the activity of the endocrine system and can cause serious health problems. Thus, it is extremely important for bodybuilders to remember the potential dangers of these drugs.

Most often, athletes experience estrogenic negative effects. They arise due to the high tendency of testosterone-containing anabolics to aromatize. Simply put, Cypionate, Enanthate and Sustanon turn into female hormones under the influence of the aromatase enzyme. It is the increase in the concentration of estrogen that is responsible for the side effects of this type. Athletes must take aromatase inhibitors to fight them. the most popular antiestrogens of this class are Anastrozole and Proviron.

Athletes who decide to buy Sustanon, Enanthate or Cypionate should also remember the possibility of the manifestation of androgenic negative effects. Compared with estrogen, they are less common. Most often, they are faced by builders, in the body of which a high concentration of the enzyme 5-alpha reductase is observed . To eliminate the symptoms of negative effects of this type, you can use Finasteride and its analogues.

The last serious side effect that bodybuilders should be aware of is the suppression of the pituitary axis. As a result, the production of endogenous testosterone can be completely stopped. This promises serious health troubles. However, problems with the operation of the HH axis are possible only with prolonged use of steroids in large doses. The medication Gonadotropin is able to stimulate the activity of the pituitary axis.

If enka and cipic are active for the same time period (14-16 days), then Sustanon is able to work for up to 3 weeks. This fact is due to the composition of anabolics. Cypionate and Enanthate are mono ethers, and sustain contains 4 active components at once. All active ingredients of this steroid are testosterone esters and differ only in half-life.

Thanks to the presence of Isocaproate and Decanoate in the composition of the sustain, the anabolic is able to be active for 21 days. However, the presence of Propionate and Phenylpropionate made Sustanon a fast acting anabolic. Enka and Tsipik are not able to quickly get to work, unlike composite AAS.

What is better Sustanon, Cypionate or Enanthate?

It is definitely impossible to answer this question. Athletes should understand that the effectiveness of any steroid is influenced by various factors, among which the most important are:

As a result, the effects of the same AAS on two athletes will be different. In this situation, we can only recommend an experiment and try each of the AAS considered today. Thanks to this, you can choose the most effective.

Novice builders decide to buy Cypionate, Sustanon and Enanthate for solo cycles. However, the human body has the ability to adapt to the work of any medication, including AAS. This leads to a gradual decline in the effectiveness of their use. Some builders in this situation simply increase the dose of anabolic steroids.

Doing so is strongly discouraged. The fact is that this is a temporary measure, leading to a serious increase in the risks of side effects. the best way out of this situation is to conduct combined cycles. A few of them will be discussed now.

This is an excellent mass-gathering bundle, which has been popular among athletes for many years. The duration of use of drugs should be limited to 8-10 weeks. Both anabolic steroids should be set twice a week. In this case, one-time dosages will differ:

Nandrolone is characterized by progestogen activity, which can cause side effects. To combat the negative effects, take every fourth day 0.25 mg of Cabergoline. This medication stimulates the production of dopamine, which leads to a decrease in prolactin concentration. Also, athletes have to reduce the estrogenic activity of Testosterone. For this, Anastrozole is used. Consume 0.5 mg of antiestrogen every third day.

After completion of the cycle, rehabilitation therapy should be carried out. Tamoxifen after the use of Nandrolone can not be used, since this antiestrogen contributes to an increase in the number of prolactin receptors. Thus, athletes need to buy Clomid. The drug is used in a daily dosage of 50 mg for 3-4 weeks.

With this combination of anabolics, you can gain weight with a minimal amount of water in body tissues. As a result, the rollback effect is minimized. The daily dosage of stanase is 40 mg. Sustanon is administered twice a week at 250 mg. The recommended cycle duration is 8 weeks.

Also, to minimize the risks of side effects of the estrogen type, athletes have to take Anastrozole. after the abolition of anabolics, rehabilitation therapy is to be carried out. Many athletes prefer to use clomiphene citrate during this period. The time for taking this antiestrogen is 3-4 weeks, and the daily dose is 50 mg.

This combination contributes to the growth of quality mass. During the day, you need to use 40 mg of turik in 4 divided doses. Testosterone Enanthate can be administered a maximum of 2 times over a period of seven days. A single dose of anabolic will be 250 mg. To reduce the estrogenic activity of Testosterone, Anastrozole is used according to the scheme described above.

After the abolition of AAS, a PCT must be performed. To accelerate the recovery of the body, you can use Tamoxifen or Clomid. The daily dose of these antiestrogens will be 20 and 50 mg, respectively. The duration of rehabilitation therapy is in the range of 3-4 mg.

Having carefully studied the properties of the three anabolics, several conclusions can be drawn:

Previous: Tamoxifen or Clomid – what to choose
Next: The best steroid cycles for all body types